Well – I wanted to use the time for doing some progress in the garden and started with organizing new material, e.g. rocks, gravel, concrete, plates, etc. But then the weather did not allow me to do that. It was raining for almost 8 days… But finally it stopped raining and I used that chance to proceed.

In the meanwhile and I started to build the powersupply and the control of the rail joints. Yes – I ordered an Tx27 kit and an Rx105 receiver from DelTang. I started making some experiences with receiver and transmitter and have to confess, that the idea is pretty nice, but the hardware is really delicate. So I broke the first receiver while connecting them to the relais board. I had to re-order one in the UK and planned to add a ULN2803-A driver chip between the receiver outputs and the relais boards.

I wonder, if this DelTang solution is the right solution to control the trains in future…. I have some contrains to be honest….

Well – this topic is not an easy one…. You may run analoge, which is the cheapest, but nor very comfortable, because you are binded to a fixed place in the garden. Running digital (DCC) is able to run the trains seperated. This solution is pretty expensive and starts at round about 800€, which is a no-go for me.

Googleing a little, I found DelTang, a british on-man-company, building extremly small RC transmitters and receivers for model cars, boats and trains….. This sounds like a nice perspective…

Again doing some progress in laying tracks. This time I bought two electrical driven joints and added them at the end of the grade as entry to the station area.

I shot two waggons on ebay, put them full of heavy gravel (about 5 kilograms/each) and let the PIKO VT100 diesel engine pull them up the hill. The result is just awesome. The loco has absolutly no issue to get them running. 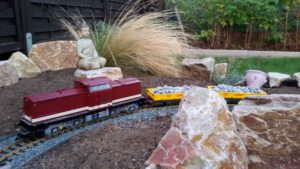 First time I put power to the tracks and made a photo session with the VT98 from PIKO. It really looks realistic.

Next step up the hill done! This time I did not use rocks to seperate earth and gravel. I used metal plates. I bendend them and hit them into the earth. Then I put off the earth in between and fill them with foil and gravel, as I did before.

First 3 meters (9 feet) of laying tracks done!
I used to dig the earth away a little, but a foil down below against weed put around 10 centimeters gravel in and added some concrete plates on. Then I screwed the tracks to them, and finally put some gravel between the sleepers. The result is pretty perfect!

Just to support the electrical power supply, I hide a plastic tube in the gravel in parallel to the tracks. The aim is to connect the tracks every 2 to 3 meters with the parallel power supply – just to garantee a good connection.

First installation of a half circle with a grade up to the planned station area. Well – I have learned, that creating a garden railway is a hard job, with earthworks, concrete, setting stones, etc.

But I think, as soon as it looks integrated into the garden, it is absolutely worth it! As long as it is under construction, is looks like a toy. But as soon as we put some flowers and grasses in between, I think it will look really great!

With some support from the local garden center I bought some grasses and flowers. I also added some underwater lights to the edge. Now it looking quite more natural – even more awesome at night.

Springtime has come! Good time to proceed in the garden!
First water feature build at the edge of the garden. The blank earth is still showing through, but it is just a matter of days, until I will get it looking better….
In addition, I installed some power plugs to control the lighthouse and the pump using a Raspberry Pi. This one os mounted in the garage and setup as a webserver. It is caluculating the sunrise and sunset everday and will turn on the lighthouse at sunset and shut it off again at 11pm. But that was another project….